BUYER BEWARE –
​YOUR DIGITAL MARKETING CAMPAIGNS ARE LIKELY TO BE FULL OF FRAUD BY CLICK FARMS AND BOTS.​​

BUYER BEWARE – YOUR DIGITAL MARKETING CAMPAIGNS ARE LIKELY TO BE FULL OF FRAUD BY CLICK FARMS AND BOTS.​​
updated 12-19-2017 - downloadable report below after article
updated 01-25-2018 - how "like" click frams work (video)

By Bill Napier
Napier Marketing Group, Inc
​Part 1 of 2 in the series. First, we’re going to discuss the fraud, in the second series we’ll discuss how to prevent it
read all our blogs here
Recently I wrote about my thoughts and research about how people do not like your digital ads – ALL THE HYPE ABOUT ONLY USING DIGITAL FOR YOUR RETAIL STORES MARKETING-I'M NOT BUYING IT – Yep over 75% of people think they’re intrusive and more. Now add this to the mix. Maybe those that are supposedly liking/following/clicking on your ads may be fraudulent.

For close to two years I’ve been inundated with the next best digital marketing platform that we could utilize to help our retailer and brand clients get the most out of utilizing the web to show more, tell more and most of all sell more.

Remember the adage from John Wanamaker –

“Half the money I spend on advertising is wasted; the trouble is I don't know which half”. Well this may be truer today than back in the turn of the century when he stated it.

After all this time, I think I found a platform I can get behind, more on that later. First, I need to address the elephant in the room. AD FRAUD.

With all these companies out there promoting the next best FAD MARKETING gimmick, I asked myself the question: What is the ROI reality of these so called digital ad driven companies? I always hear the words/statements “We Increased Conversions by XXX%”. People, conversions are clicks and these are riddled with potential AD FRAUD and here is why and how it’s done and you don’t know it’s happening.
​
According to Business Insider, a study commissioned by WPP, clicks automatically generated by bots, could reach $16.4 billion in 2017 and could reach over $50BN in 2025. Hey, this fraud and the profits are second only to organized crime’s drug trade! 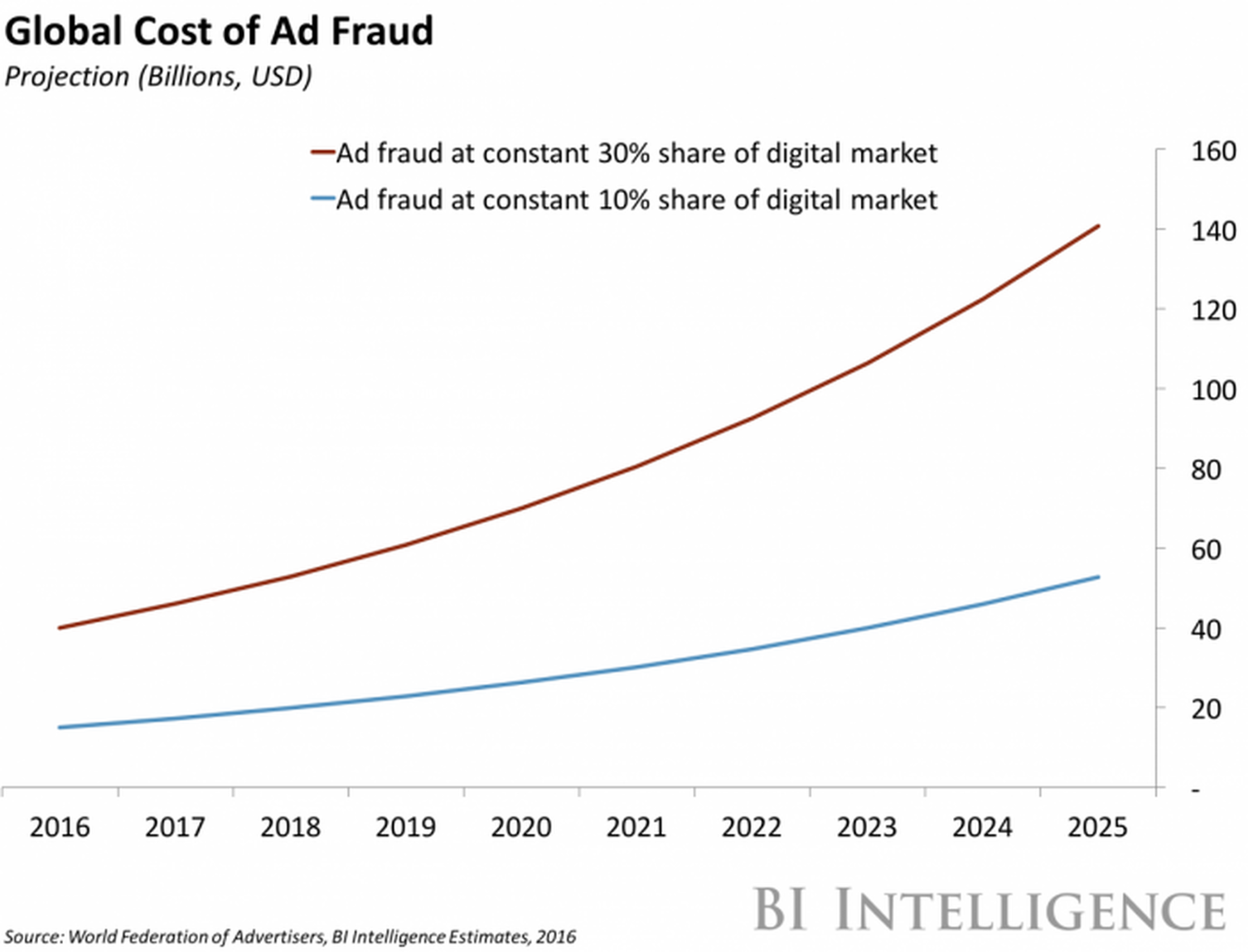 ​But that’s not all. Look at this:

Adloox conducted its study across 200 billion daily bid requests, 4 billion ad calls, and 10 billion ad impressions a month, over a period of 12 months.

​   Across the 200 billion bid requests, 50% were detected as being either non-human traffic (either a bot or a hijacked device) or fraudulent traffic, which includes bad actors trying to spoof real web domains to attempt to pass off to ad buyers as premium publishers.

​John Wanamaker would be proud!

EVEN GOOGLE ADMITS THAT THIS IS A HUGE PROBLEM
GOOGLE ISSUING REFUNDS TO ADVERTISERS OVER FAKE TRAFFIC, PLANS NEW SAFEGUARD
08-25-2017

​HERE'S THE WORST PART. AD FRAUD IS NOT ILLEGAL​

​One of the biggest reasons fraud is so rampant is simply that it’s not illegal. Unlike credit card fraud, bank fraud, false advertising, etc., nobody is going to jail for ad fraud, and it’s not exactly the sort of activity that elicits a crackdown from law enforcement, which means there is significantly less risk involved. And yet it’s extremely lucrative. 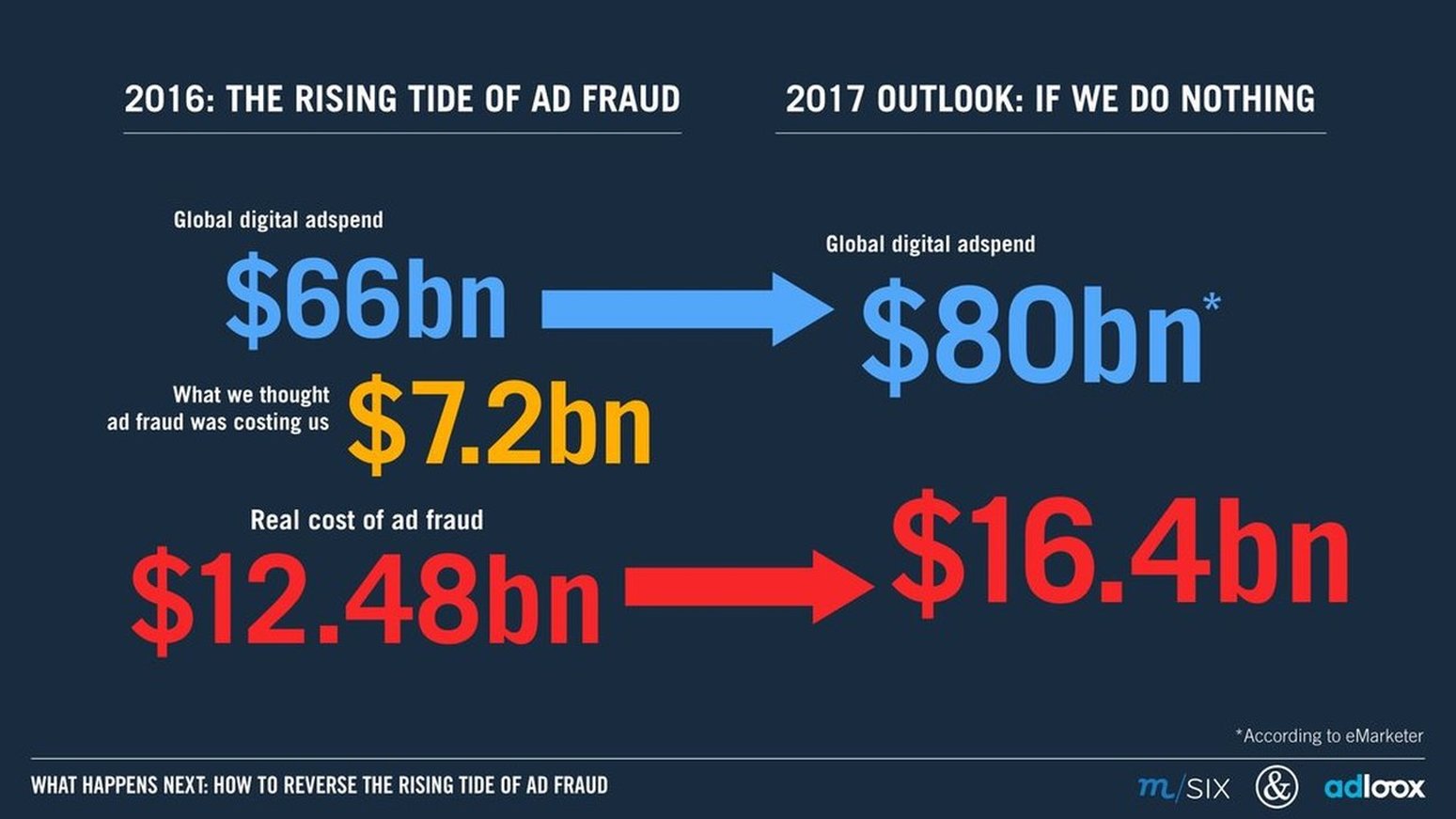 ​So what are the two main culprits in this massive fraud.

​Click Farms are usually located in developing countries with very low wage rates, such as the Philippines, India, and Bangladesh, among others. Many use proxy servers or VPN. Workers are paid low amounts, perhaps one dollar for a thousand Facebook Likes. Most probably earn about $300 to $400 a year.

The Click Farms then sell their likes and followers at a much higher price.

You can check this yourself.
​
Just Google the words “Buy Facebook likes” and you’ll find several companies listing prices. They include Buy Cheap Social at $16 for 1,000 ‘real human likes’; BoostLikes at $71 per 1,000 likes; or iBuyFans with 1,000 likes for $17.99 or 10,000 for $149.99.
There is even an advertisement that’s in your face called www.clickmonkeys.com. When researching this article, they came up #1 organically in Google’s search.
Their claim to fame and marketing message is to solicit marketers who are under pressure to have their social platforms perform. If you hire them, you’ll get the clicks/followers, etc. to boost your rankings, creating a perception that you “are liked/loved”.
If you Google the phrase Click Farm Fraud you’ll get:

​In a recent article in ADWEEK it was written “Online ad fraud driven by bots will cost brands $7.2 billion globally this year, according to a forecast in a new joint study by the Association of National Advertisers and White Ops. That's up from the $6.3 billion the two organizations predicted in a similar report for 2015. ​

WHAT IS A BOT. ACCORDING TO ZVELO

Ad fraud happens when a bot attempts to imitate legitimate web traffic (acting like a real person visiting a website) and generate additional (but fraudulent) web page views  (and therefore revenue) for the website publisher. The advertisers’ budgets are compromised, as their dollars are being wasted on ads being served to bots rather than humans. This results in the advertisers and the end users paying the price for this fraud, as well as being exposed to the risks associated with malicious and fraudulent bots.  Recent estimates have put the cost of Ad fraud at 20-30% or more of the online advertising spending, or several billion dollars a quarter.
​
Some tactics deployed by Ad-fraud bots are:

Advertising Age had a headline;
Report: For Every $3 Spent on Digital Ads, Fraud Takes $1
WOW, 30% is contributed to fraud, John Wanamaker may like this because it’s less than his 50%, but are you willing to accept these numbers? I’m not

​EMARKETER HAS WEIGHED IN ON THIS FRAUD, TOO

So what should you do?

Part 2 of this blog will focus on specifics
First, focus on real people. Email campaigns and digital marketing companies that focus on a users IP address that can marry that information to a real home address and prove it. There are companies out there like El-Toro.

​I’ve been talking to them for a year, and their case studies in the furniture industry have me convinced they have a better mousetrap. Why? Because they hate “click marketing” and their case studies show successes in sales dollars vs. spend, instead of the ubiquitous Clicks/Conversions vs. sales dollars spent. You can find out more of how this works on my website: www.napiermkt.com

Second, make sure that whoever is running your digital campaigns “prove to you” that the traffic generated is real.

​If your digital ad company doesn’t give you a full audit, RUN. If they audit shows a percentage of potential BOT/Click Farm Fraud, make sure you get a credit back for that percentage.

In summary, I hate FAD MARKETING. FAD MARKETING is where a marketing person pushes out information on the newest/coolest FAD without providing Due Diligence. They talk their retailers into a platform to spend or waste their money on the newest supposed best way to attract and engage customers. They report ambiguous statistics, use generalities in their results and only provide one side of the equation

That hurts our retailers, makes them suspicious of new or traditional programs that do work, which in turn hurts their profitability and speeds up their demise.

But there is more ... MUCH MORE. Keep reading

clicking ads
so you don't have to.

This company, under the guise of "DOING GOOD" actually does really bad things to your ad budget.

Click the image to read the article - BE SACRED ... VERY SCARED

download the complete report on digital ad fraud below

check back often for updates on this click fraud e-book

Over the past 8 years, El Toro has built a completely internalized ecosystem that logs, maps, and verifies IP data. When using El Toro, advertisers can target the exact households and buildings to reach exact audiencesby accomplishing what was never before possible at the DSP level. HOW SpawnXWORKS Currently, Ad Exchanges and Demand Side Platforms operate in a cookie-based programmatic environment that bids on ad placements based upon cookie profiles, geolocation cookies, and an array of other unknown types of bot and fraud enablers. These exchanges can not differentiate if the traffic source is human or non-human, therefore advertisers are bidding to show ads to mostly non-human sources that will not and can not buy anything from them, ever.

SpawnX, by El Toro, is monitoring the open market for those exact household IP’s and/or Device ID’s, solely to win that ad placement because it’s the exact target provided by the advertiser. Data can be integrated with El Toro’s system, or can be onboardedby the advertiser.

​HOW SpawnXWORKS (cont.) Targeting segments for all campaigns are assembled pre-campaign with SpawnX. Advertisers onboard their 1st party offline data, CRM data, postal records, IP’s, and Device data. With SpawnX, advertisers are able to build their target list based off empirical information such as: income, marital status, credit score, and 100’s of other filters that are traditionally only available in the direct mail world. El Toro has bridged the gap between offline data with online display and video advertising.
SpawnX’s bidder provides access to 9 out of 10 websites that has servable inventory. SpawnX sits directly on top of the feeds, which means SpawnX have eliminated all third parties when serving ads online. SpawnX’s bidder is faster, more efficient, and can ID fraud and act on it in real time by using advanced header detection and ad blocker ID. SpawnX can also detect if an IP or device is infected with malware. In cases such as this, the SpawnX platform will null out the bid and let the next highest bidder (your competition) purchase that inventory. Simply put, SpawnX is better than a DSP, but don’t call us one. ​​
free marketing analysis
View My Stats